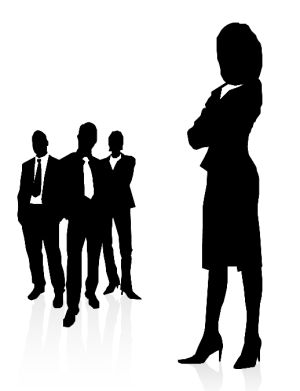 In some species of nature, females dominate. I wouldn’t want to mess with a momma bear with a cub, that’s for sure. However, humans have for a long time had the idea that women were the “more frail” sex and, at least in public life, they were expected to stay in the background. The men on the other hand were expected to be the primary breadwinners and to provide for their families. Modernity, however, has been throwing this stereotype on its head. We’ve all known or heard of a couple where the mom is a high-powered successful career woman while the dad stays at home with the kids, or couples where the woman is absolutely loaded and becomes the “suga mama”, and even couples where the man simply makes significantly less than his female partner.

I’ve always been fascinated by these sorts of relationships. I’ve always felt that any relationship between two partners should be more or less balanced in all respects, and not only monetarily: if one partner earns more money, the other partner can always contribute in their own way. A companionship where the two partners diverge greatly can still work, but a big disparity can cause issues, especially for men used to the idea of being the primary breadwinner.

This isn’t the 1950s anymore, and at least in the more civilized countries around the world, women and men have become more or less equal both legally and morally speaking. I think this is a great development, because women are so good to us men and we are all human, so it’s only fair for all of us to have the same rights. Nonetheless, men still act like they’re from Mars and women like they’re from Venus. We perceive the world differently, and we’re built differently. There is nothing sexist or unfair about this (well, my girlfriend might disagree about the unfairness of how only women go through “that time of the month”); it’s simply the way things are.

Likewise, even though we’re all equal now, traditional roles still exist, and this can be seen in dating. This is less common than it was before, but I believe that many men still believe in paying for the first date, showing special attention to her needs and emotions, and in small gestures such as holding the car door open for her. Even today, chivalry can still go a long way. Many women that I know don’t see this as sexist, but actually like this and appreciate it, and I’m not so sure it helps when a guy pretends not to see the bill. Women today are the equals of men and are stronger than ever, but many still appreciate the small gestures and we still have some traditional ideas of the roles that men and women play. After all, how strange would it look to see the woman putting her jacket on a guy and walking over to hold the car door open for him?

Many men also feel that they should be the provider for their family, and that the kids will benefit from a mom that doesn’t have to work as hard so she has the time and energy to care for the kids. The dream of many men is to earn enough income so that their wife doesn’t have to. When the woman instead earns enough money so that the man doesn’t have to, this cultural expectation gets turned on its head.

Is it all relative?

Do people get bothered in general by large disparities in income between partners? Maybe it depends on how much both partners are making. Take the following scenarios as an example:

Now I can imagine that there could always be a feeling of imbalance when one partner makes double what the other partner makes, but I think the person making $25,000 compared to the partner making $50,000 will feel that much more inadequate, simply because when the level of income is in that range it has a very real impact on the basic material needs of the couple. It could mean the difference between living a “so-so” lifestyle and living a more comfortable lifestyle. One partner may feel significantly constrained by the other. People with higher levels of income can afford even a luxurious level of material comfort rather easily, so there will be less of this type of contention as absolute income rises.

Although men can get uncomfortable by the idea of no longer being the primary breadwinner, how do women feel when the man “makes the bacon” and then expects the woman to spend her day cooking and cleaning and that she “owes” it to him because he’s the one making money and she isn’t? Is money really the only way that someone can contribute to a household?

In my relationship, things are pretty balanced. We both come from different backgrounds and culture, but we also have similar values and want many of the same things out of life. We make similar salaries and we’re both at a similar position in life in age, education, and experience. We both agree in the value of saving, although she’s more of a fan of coupons than I am. It’s good now, but maybe it would feel a little odd if she were an executive and made a salary double or triple mine.

How about you? How do you feel about the idea of relationships where one makes significantly more than the other, regardless of if it’s the man or the woman? Is this an issue that affects only men? I imagine that many women are driven these days and feel that they deserve to earn at least as much as their fellow man if not more, and I don’t disagree with them. How would these women feel if their man made more than them and expected them to stay at home and take care of all the chores and that it was their “duty” to do so?

I believe that there are innate biological roles for men and women, but I also think that we should always be free to choose the type of relationship we want to be in and that while each partner should contribute equally, this contribution is not limited to the money one brings home by paycheck. In fact, if all a guy does is bring home a paycheck and they never spend time with their kids and act like a big man simply because they work hard, they did a pretty bad job in my opinion. In my eyes, the driven career woman is completely fine, although it does mean that gender roles are no longer traditionally defined and we need to question the roles that a man and woman should play in a relationship and as part of a family.

So, reader, what are your thoughts? I’d love to hear what you think.