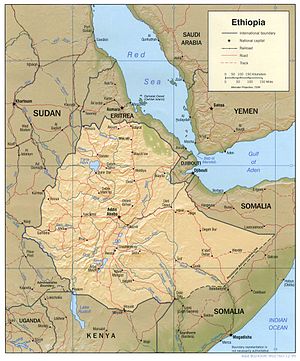 I’m finally back from my trip to this beautiful country located at the horn of Africa; actually, I got back a few days ago but between work and jet lag I have been in a recovering sort of zombie-state, finally getting back to normal. 😉

Ethiopia is a rugged country with mountains and high plains; the air is thin and a little chilly, and this time of year is the wet season. It is such a contrast in comparison to the desert of Sudan to the west and the drought of Somalia to the south. This is the country where Lucy, an ancient cousin of ours, was found. It is a country where Muslims and Christians peacefully coexist, and have done so for thousands of years, and is also connected to the Rastafari movement through the last emperor, Haile Selassie I. This is a country of beauty that will stir you, and poverty that will shake you. This is Ethiopia.

The people are slowly coming into their own as the country is still finding its own footing, having recently emerged from the devastation of the Marxist-Leninist variety of communism that was inflicted upon the populace by the elite only a couple of decades ago… this is the same country where the scenes of mass starvation as dramatized in films like Beyond Borders were once reality. Things have gotten better since then, and foreign investment is slowly but surely starting to take a foothold in the country. Roads and dams are being built, foreign companies and nations such as the Chinese are coming in and building factories, and slowly, living standards are improving.

At the same time, the environment is an ever-pressing concern. Ethiopia is home to a fertile and beautiful countryside, but her forests are coming under a lot of pressure and her resources are being strained as the population is booming. The population was around 33 million less than three decades ago, and is nearly 90 million today!

Ethiopia is a land of contrasts. In the city, the air is horribly polluted by ancient Ladas and mini-buses running on cheap gasoline, and the air is fogged with clouds of black and blue smoke (I recommend that everyone have travel insurance, but for older people, travel insurance over 65 is especially important!). People live in tin houses next to five-star hotels, and the goverment elite work in huge walled compounds in the middle of the city with beggars just in front of the walls. Outside of the city, it is almost like one goes back hundreds of years. The recently-built highways are smooth and modern, yet on the weekends they become filled with donkey-pulled carts as families head to the market to trade their goods. Electricity does not exist in many parts of this world, and on an overcast night it becomes so dark that you literally cannot see anything — your eyes may as well be open or closed as you won’t see more than a very slight fuzz in front of you. 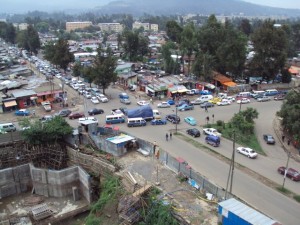 Traffic in Addis Ababa. This is actually a pretty clear day, and you can see nearby Mount Entoto. Most of these intersections are completely uncontrolled — first in has the right of way, though sometimes one street has “more” of a right of way than the other. At heavy traffic times, they will turn the lights on or a traffic control officer will enter the intersection and direct the traffic. In other parts of the city they use huge traffic circles that are even more fun to cross on foot than these intersections. 🙂 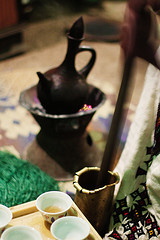 Ethiopia is the birthplace of Coffee Arabica. 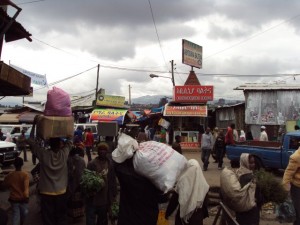 The hustle and busle of the Merkato, Africa’s largest market. 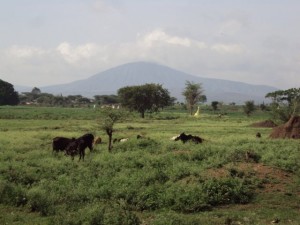 The countryside about a hundred kilometers from Addis Ababa. The elevation here is a bit lower, around 1500 meters, and the landscape is lush and green. In the distance you can see a dormant volcano. 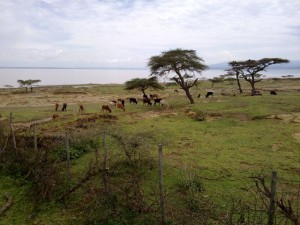 The area just next to Bishangari on Lake Langano. We were brave… or stupid enough to venture out there on our own, when everyone else uses a local guide. It was quite an experience, as we met children, a shephard, and birds, cows, goats, and even warthogs off in the distance. 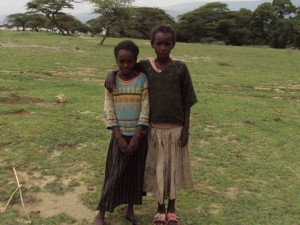 These two girls were fascinated with us, but also shy. They spotted us from far away and ran up to us as we were walking back to the gate. They kept whispering amongst themselves and seemed very happy. They were so charming, and they let us take a picture of them and we tried to communicate with each other, but it was a little difficult as they didn’t speak any English nor we Amharic.

We had nothing on us at the time and the only thing I could give them was a bottle of water. I felt really bad cause I’m sure they would have appreciated it if we had had other things on hand to give. We came back later and ran across four other kids, and gave away some clothes and essentials, and a couple things that they enjoyed like bracelets and other things like that, but we couldn’t find these two girls again.

The downside is that if you do this too much you foster a culture of dependency. We were safely up in a tower on the other side of a fence when two ferenjis walked out of the forest accompanied by a guide. Moments later literally 20 kids followed out, and while they kept a distance from the guide they made a beeline straight toward us. They were cute at first and smiled for a picture, but then some of them started to throw rocks and sticks at us cause they were waiting for something and we had nothing left by that point. It was starting to feel like Lord of the Flies so we got out of there, but still have to feel bad. Why am I in such a fortunate position relatively and materially speaking? There must be ways of helping that benefit both parties without fostering a dependency on the part of one.

Overall, I am grateful for my journey here. This is a beautiful country with beautiful people, and there is much to see and learn here.

A special thanks to the guest posters who wrote great content and kept the site going during the time that I was away:

Are You Investing Wisely in Yourself? by MightyBargainHunter.com

How to Plan the Ultimate Retirement by FSYAonline.com

Are You Spending Your Time Wisely? by Family Money Values

Beware The Coupon Code… by Everyday Tips and Thoughts

Thanks very much for the support, guys, and thank you dear reader for visiting Invest It Wisely and leaving your valuable comments and feedback. I appreciate it and I always look forward to the next one. 🙂