The following is a guest post by Trace Mayer, J.D. an entrepreneur, investor, journalist and monetary scientist with degrees in accounting and law who understands economics and can help you understand monetary science and economic law at Run To Gold and how to control your personal privacy at How To Vanish. 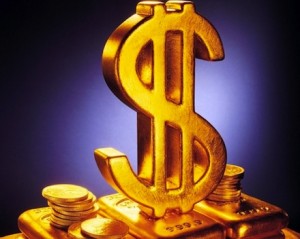 A couple days ago Kevin wrote a great article about gold’s recent rise and potential along with including my chart to which Timothy@The Wealth Artisan responded in the comments, “Hands down, this is one of your finest articles. This is extremely thorough in many regards. The Great Credit Contraction image is a huge eye opener as well.” There are major changes happening to the world financial system, like tectonic plates shifting, and as Kevin points out gold is money. But you work real hard every day to hopefully accumulate some capital and what does ‘gold is money’ mean and how can you apply that true knowledge of monetary science and economic law to your hard earned capital to invest it wisely?

This is one of the reasons that Article 1 Section 8 Clause 5 provided for Congress ‘To coin Money, regulate the Value thereof, and of foreign Coin, and fix the Standard of Weights and Measures.’ Having a definition is a fundamental prerequisite to using a numeraire either personally or collectively as a nation.

At all times and in all circumstances gold remains money. It is the most important money in the world. This does not mean it is the most widely used or popular currency, the medium of exchange in ordinary daily transactions. Additionally, money does not really have much of a definition other than it must be a tangible asset.

As a trained attorney I am equipped with the skills to isolate issues and define terms. The Founding Fathers, many of whom were also lawyers, understood this principle of definition and its importance because they specified in Article 1 Section 8 Clause 5 that Congress has power to ‘Coin Money’. Notice it says coin rather than print. Under Article 1 Section 10 Clause 1 the Framers restricted the powers of the States with ‘No State shall … emit bills of credit or make anything but gold and silver coin a tender in payment of debts’.

These monetary powers and disabilities in the US Constitution show that gold and silver are not mere commodities to be shaped into fun coins or bars to pet but instead that the monetary metals are essential checks and balances in the political machinery. They are so essential to ‘insure domestic Tranquility’ that the 1792 Coinage Act under Section 9 defined the term dollar, used twice in the Constitution, as 371.25 grains of fine silver and then Section 19 it provides ‘That if any of the gold or silver coins which shall be struck or coined at the said mint shall be debased or made worse as to the proportion of fine gold or fine silver therein contained … every such officer or person who shall commit any or either of the said offences, shall be deemed guilty of felony, and shall suffer death.’ 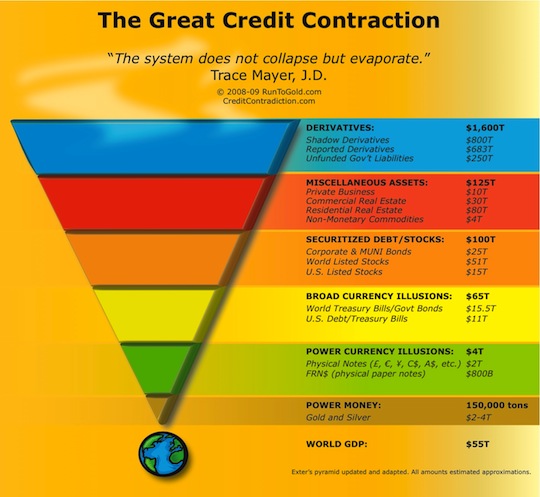 Some pictures are worth a thousand words but as Timothy said, ‘The Great Credit Contraction image is a huge eye opener as well.’ While imperfect I have attempted to distill thousands of pages of economic theory and monetary science into the chart. Heck, just explaining how the image conveys Inflation Or Deflation took about 3,000 words. The current fiat currency and fractional reserve banking system is evaporating; as opposed to collapsing because that connotes there is wreckage. Capital, both real and fictitious, is burrowing down the liquidity pyramid into safer and more liquid assets while the illusory wealth returns to the monetary netherworld; it never really existed anyway.

Understanding this mega-trend undergirding gold’s performance is essential in regards to your capital so you can invest it wisely. For example, a few charts I include in my book The Great Credit Contraction show how the price of stocks and homes in gold or silver are declining. 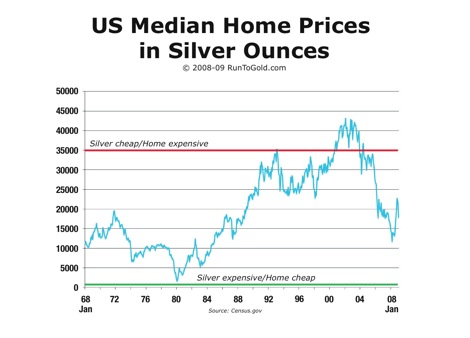 As a trained accountant I understand the importance of financial statements being ‘comparable’. What does 2+2 equal? Is not a prerequisite a stable definition of the term 2? What if there is no intelligible definition? Then you get the ‘good accountant’s’ answer: Whatever you want it to be.

But jokes aside we are talking about your money and the most valuable of all your commodities: time. You work hard all day long and probably do not spend all the fruits of your labor which leads to the need to invest excess capital wisely so you can build an infinite portfolio to escape the rat race. Quantitative easing is just another name for massive confiscation through inflation which is a form of taxation without representation. As you become better acquainted with monetary science and economic law you will likely no longer grope around unintelligibly but instead make wise, rational and logical capital allocations which generate positive returns. But returns in what? GOLD.

In May 2010 Rep. Anthony Weiner accused Glenn Beck of trying to play on people’s fears by persuading them to buy gold. Being consistent with RunToGold’s practice of using gold as the numeraire I calculated Mr. Weiner’s balance sheet in gold and found that in about 10 months he had a staggering loss going from 154 to 121 ounces of gold or about 21.2%. Worse, he probably does not even know it. 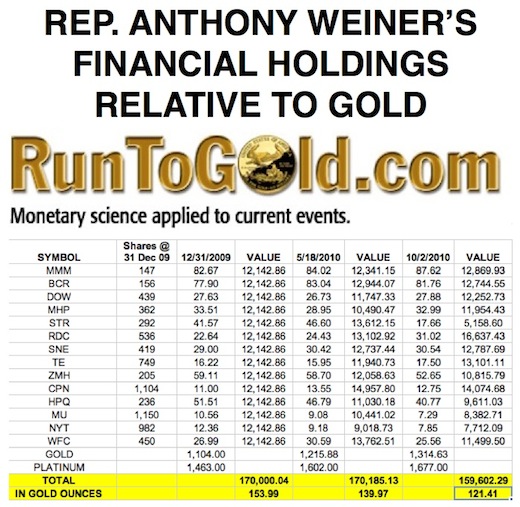 The Great Credit Contraction has started and there is no stopping it. Economic law will play itself out. But Rep. Weiner’s financial condition does not really matter to you. What matters is do you know where you stand financially in gold? If you want to learn the truth about money you are going to have to learn it on your own. Now whether you buy gold or not is a completely different issue.

In fact, based on the 200 day moving average I think it is a little expensive right now but still has some room to run. Where? Probably around $1,500 to $1,650 like Kevin wrote. But if gold is expensive then the question becomes what should I buy? The answer is something cheap when viewed in gold; like an average American house priced around 500 ounces of silver which is a long ways to drop from the current price tag of about 20,000 ounces.

This was a guest post by Trace Mayer, J.D. an entrepreneur, investor, journalist and monetary scientist with degrees in accounting and law who understands economics and can help you understand monetary science and economic law at Run To Gold and how to control your personal privacy at How To Vanish.
[Kevin] Thanks for sharing this post, Trace! I’ve done a lot of reading and thinking about this subject lately. It seems that in the past few decades, North Americans have increasingly disregarded gold as money. In fact, the gold “investor” or physical bullion purchaser has been looked upon with suspicion and disdain. Only recently are some people regaining interest in gold, but this is mainly due to the great price hike over the past few years. Much of this interest is speculatory in nature, but I don’t think that gold should be looked at as a “get-rich” scheme nor as an investment in the traditional sense. Gold’s primary role over the past few thousand years (excepting the past few decades) has been as a form of money. After undergoing years of disrespect, could gold once again be regaining its seat at the table of money?

World Bank President Robert Zoellick recently said that “The system should … consider employing gold as an international reference point of market expectations about inflation, deflation and future currency values.” Some have interpreted this statement as a desire to move back to the classical gold standard of the late 19th century and early 20th century. I personally don’t believe this is appropriate. The gold standard did not prevent the massive credit ramp-ups that occurred back then, and returning to a fixed-price regime will not fix our problems today.

What I believe is that instead, people should be personally free to save and trade in the money of their choice, and there should be no laws or restrictions prohibiting them from doing so. Instead of going back to a fixed regime where a standard is enforced top-down by the government, we should move forward and continue the trend that we’ve been heading down by floating currencies against each other — except that people should be free to also choose gold, silver, and anything else they would like to use as money and as a store of value. These would also float against fiat, but under fair terms. Let the ordinary people have the same freedoms that central banks enjoy today. Give people back their freedom over their money and wealth. They may choose gold as their preferred money, just as they have for thousands of years, except the choice will have been freely made based on its merits, rather than by decree.

So, reader, what are your own personal thoughts and feelings as gold? Do you feel that it is a “barbarous relic”, or does it have a valuable role to play in our monetary system? Is the recent price rise indicative of a price bubble, or could there be other factors at play, as well? Perhaps most importantly: do you think that the current actions of central bankers are going to lead to more prosperity down the road, or more headaches and problems? I’d love to hear your thoughts.