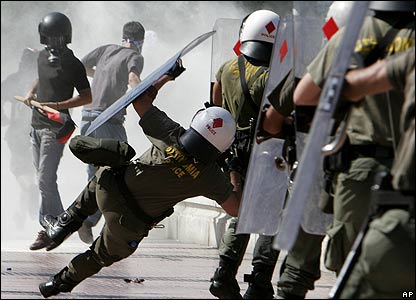 It’s been a pretty interesting week as far as events go. The pressure has been on and off Greece all week, as it now seems clear that a bailout for them is coming, but the question is under what terms and conditions. Angela Merkel of Germany is going to have to face regional elections soon, and the German voter probably does not feel too good about paying additional taxes or having more debt on their shoulders in order to support the profligacy of Greece.

On one hand, it’s probably morally right to stop feeding the addiction of the coke addict. It is painful to go through withdrawal, but it is what is needed in order to recover and get back on the path to a sustainable level of government. On the other hand, we cannot look at everything in strict isolation as our economies are so interconnected these days, and the cost of a bailout may be less than the cost of a cascading fall of dominos as states default, one after another. Such conditions are ripe breeding grounds for populist tyrants, such as the world endured back in the first half of the 20th century.

It’s a choice between the frying pan and the fire. If those in power choose one path, they save their political careers, and Greece probably avoids a complete meltdown. However, it sets up the stage for a bigger fall in the future, once the loan money is exhausted, and it gives a bad example to Spain, Italy, and others in similar shoes. If the other path is chosen, Greece suffers the consequences of its past decisions and is left to its own fate. The markets crash, leading to another good buying opportunity but also sowing the seeds for severe social unrest and disorder in Europe and a possible series of collapses as investors refuse to finance further deficit spending.

So, is there a middle path between these two options? Can Greece simultaneously get bailed out and return to fiscal sustainability? Here is an interesting graphic about current sovereign debt levels and where they are going in the future.

Here are some good links for your weekend reading:

Beating the Index: Stock Trades Update: Bought TSE:FVI
Mich shows just how entertaining it can be when a stock falls due to emotions rather than fundamentals. This is what creates good buying opportunities!
Investment Watch Blog: More American Expatriates Give Up Citizenship
Investment Watch Blog covers this story from the New York Times about the increasing numbers of Americans giving up their citizenship.

“Anecdotally, frustrations over tax and banking questions, not political considerations, appear to be the main drivers of the surge. Expat advocates say that as it becomes more difficult for Americans to live and work abroad, it will become harder for American companies to compete.”

“American expats have long complained that the United States is the only industrialized country to tax citizens on income earned abroad, even when they are taxed in their country of residence, though they are allowed to exclude their first $91,400 in foreign-earned income.”

Wealth Pilgrim: Should I Change My Career? Three Questions To Help You Decide
Wondering if it’s time for a career change? Not sure if you’re on the right path? Neal over at Wealth Pilgrim is there to help.
7million7years: I’m Angry!
Adrian over at 7million7years is angry. Why? Well, you’ll just have to go over to his site and read about it to find out. 🙂
Read-y: Do something for the planet – Dispose your CFL Bulbs properly
Read-y talks about why it’s important to dispose your CFL bulbs properly due to the mercury content. I personally would recommend avoiding the issue altogether by not purchasing CFLs; I can’t stand the lighting quality as they do not give off a full spectrum of light and it feels unhealthy. However, if you really must buy them, then at least dispose of them properly!
Money Reasons: Crucifying Goldman Sachs, Start of The Witch Hunts
As populist fervor grows, events like this will start to become more commonplace. However, you have to ask yourself… will the final result mean a more transparent market open to more competition, or a more oligarchical market protected from competition?
Canadian Capitalist: Greek Woes: What to do now?
Canadian Capitalist discusses the impact of Greece’s woes and how it can affect your investing strategy.
Money Funk: Private School: Worth Your Money?
Private school, or public school? That is the question…
Hope to Prosper: Earth Day Investment Ideas
Hope to Prosper tells us how far the US has come since the Cuyahoga River caught fire in 1969, and how much still needs to be done.

See you next week!