The following is a guest post by JT McGee of MoneyMamba: 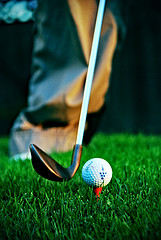 Adam’s Golf (ADGF) is the micro-cap of all micro capitalization stocks—you could buy the company outright for just over $42 million dollars. But while its small size may be threatening to some, it is important to remember that sometimes the biggest earners come in the smallest of stocks. This stock, I believe, is one such stock.

I’ll dive into the macro and the micro scene to see what makes this company so attractive.

Even with a market cap of $42 million, the company retains over $6 million in cash, $17 million in receivables, and $27 million in inventory on hand. (Inventory piles up in the 4Q before slurry of sales in the first and second quarters.)

The company has only $15 million in short-term debt, and zero long-term debt. Ignoring its $10 million in long-term assets because they’re mostly illiquid, the company is still well capitalized, with current assets outpacing debt by $27 million, according to the 2010 annual report.

The Macro Scene: A Depressed Economy

You’d have to have lived under a rock to avoid the headlines. Consumer spending is weak, and recovery may be months, if not years away. For a spendy sport like golf, a poor economic climate isn’t exactly bullish, except when it is.

While sales for golf clubs and accessories were weak in the deepest of the downturn, this also means there is plenty of pent-up demand. Golfers, after all, are still doing quite well.

A series of surveys conducted by OnCartWest revealed that the average golfer takes home over $87,000 per year and has a net worth of more than three-quarters of a million dollars. The average golfer, aged 39 in 2003, isn’t pinching pennies. In fact, more than a quarter of all golfers own their own business. (Study information link: http://www.oncartwest.com/pdfs/demographics.pdf)

The benefit here is that golfers have a lot of their net worth tied into their own investments, and are disproportionately made beneficiaries of rising stock prices. Appropriately priced in the middle of the road for golf clubs, Adams is a perfect fit for the penny pinchers, as well.

One of the most exciting elements of Adam’s Golf is that it’s growing, and quickly. In January, the company deployed $1.65 million in cash to purchase a then defunct Yes! Golf, a company best known for its line of putters. Adams has plans to revive the brand, using its image and other intellectual property (designs, patents, and distribution channels!) purchased at auction to buffer its brand. Yes! Golf sports a collection of victories in golfing tournaments, with its putters playing a part in more than 100 tournament victories, including several wins in the majors.

Even rosier is that Yes Golf has excellent international sales. The company has a very serious grasp on English and Irish golf retailing, a weak spot for Adams. When Adams revives the Yes! brand internationally later this year, it stands only to reason that Adams’ line of drivers and irons will soon follow Yes! putters across the pond. International sales posted 8% growth last year, despite frequent backorders on one of its most popular products: its line of Speedline drivers. That’s attractive, especially since many of its backordered products were still backordered by June.

With $7 million more in inventory this year than at the same time last year, the annual report notes that the company made sure they wouldn’t face a lack of supply to meet 2011 demand.

Domestically, Adams stands to benefit in grabbing more shelf space. With two brands under its wings, the company will soon have an entry into the putter section of your nearest golf store. Golfers have commented that it was Adams putters that had been the weakest link in their collection.

Where other golf giants like Callaway cut back on their marketing in 2009-2010, Adams doubled down. The company sponsored several new players, and expanded its marketing to boost international sales.

This aggressiveness paid off in a big way when Golf Digest named as “Editor’s Choice” on its annual “Hot List” for 2010, a mark of a brand that is growing in recognition. Its Idea hybrid-irons again took home the loot as the best hybrid clubs in golf, but its drivers also took silver awards for being top-notch clubs.

Its hybrid clubs have always been its best seller, but where Adams is winning awards for its products in 2011, it was pitching them on televised infomercials less than a decade ago. This is a brand that is still working to brand itself as a quality club amid larger, well established rivals. A staple on the Seniors tour, the young guns in the PGA are just starting to take to the hybrid, “game improvement” irons, a segment this company practically owns.

In terms of sponsorships, one particular golfer caught my eye: Ryan Moore. An improving player on the PGA Tour, Moore forfeited an ownership stake in Scratch Golf to become an Adams-sponsored player. Ranked 42nd in the world, he’s not exactly a household name, but he is known on the tour among enthusiastic golf fans.

One of the best parts about the internet is how you can see, in real-time, how people view a particular product. A quick Google search of “forum” “Adams Golf” reflects a number of good reviews, with the customers seemingly becoming happier with their products the closer you get to present day. This is very important to me, as I know that people who take the time to talk about golf online are probably more interested and informed on golf products than your average Joe.

Not for the faint of heart

Adams Golf is a thinly-traded micro-cap, and as a result the stock sure moves fast when it does. With daily volume of just over 15,000 shares per day, investors would be wise to average in slowly, rather than make aggressive purchases.

That said, a lack of liquidity shouldn’t be too daunting for anyone in for the long-haul. As someone who was happy to snap up shares when you could buy the company for just over its cash on hand this time last year, I’m still happy to be buying in at these lowly valuations. If you’re in it for the business, the market doesn’t much matter, as far as I see it.

When the dust settles and the economy recovers, it will become clear that the management is more than capable to take this small company to the next level. Aggressiveness in growth, especially in a horrible market cycle shows that the management has the capacity to see this thing through. I’m in this company for a potential buyout play; it’s exceptionally cheap, and a classic value stock but with all the avenues for future growth.

In going forward, investors have a rare opportunity to get into a company that is doing everything right in an industry that the economy has wronged. As pure-play on consumer spending, Adam’s looks like an attractive wager in 2011.

Would I make it 10% of my portfolio? Absolutely not! With less than 600 shareholders, ownership is so concentrated that to buy in big you might push this little stock up 20% in a day. But with that said, this is where individual investors have the upper hand on institutional investors—stocks where it doesn’t make sense for the big-boys to come in heavy.

If you’re looking for a Walmart or a Proctor and Gamble, this stock simply isn’t it. But if you like risk, reward, and enjoy playing the fast-paced world of largely undiversified micro caps, this one ensures you’ll have the ride of your life. A 100%-pure golf stock, there’s no diversification here, and to be honest, it’s a mostly all or nothing wager. It’s not intended for your retirement account, though it does make an exciting bet on recovery.

Full Disclosure: I am currently long Adam Golf as a long-term play. As mentioned earlier, this is a high-risk, high-reward stock that is not suitable for those who are not used to investing in small cap stocks, and I would caution everyone to do their own due diligence before making their own informed decision about how they should manage their money.

The above was a guest post by JT McGee. JT blogs about finance, economics, business and more at MoneyMamba.com.